Based on my research and study of the swing method principles that I teach, I believe that there are three true fundamentals to golf:

Last issue I addressed the low point of the swing, which applies to hitting the ground in the same place every time.

This issue I’ll address the ability to create enough power or distance to enjoy and play the game.

I’m not talking about smashing 300 yard drives and hitting 185 yard seven irons. If you can do that congratulations, you’re an elite class player.

I’m talking about hitting a seven iron about 150 yards and a drive around 250 yards. If you can hit those marks, you have plenty of power to potentially play the game well.

There are several factors that go into being able to create power and distance, but I think one of – if not the most important – is developing speed through angular momentum.

Here’s the way that I explain angular momentum to my students at their first lesson.

Many years ago, NFL field goal kickers used a straight through approach to their kicks, and kicked the ball with their toe. Guys like Lou “The Toe” Groza, and Paul Horning kicked with this straight on style, and they even wore kicking foot shoes with a square toe to help with their accuracy and power. They generally produced 40 yard or so kicks with decent accuracy, and in the early days most teams didn’t even have field goal specialists. Some of them even had other duties in addition to kicking field goals.

The reason was – you guessed it – angular momentum.

The straight through kicking style used vertical – up and down – momentum for a power source, whereas the soccer style approach – from the side – used angular momentum as the power source.

The proof was in the pudding.

Here’s how all of this relates to the golf swing.

Most of the players that come to me for lessons have too much up and down in their backswing and downswing.

They lift the club up in their backswing because it seems like the right thing to do to produce a downswing that will launch the ball into the air. That’s like the straight on approach old field goal kickers used. It’s based on vertical momentum for swing speed and it rarely produces enough power or distance to enjoy and play the game of golf.

After I get them into the habit of swinging their hands and arms a little deeper on the backswing rather that higher on the backswing, angular momentum is produced and they pick up as much as 7 mph swing speed, which equates to roughly 20 yards more carry. And they can build on that.

Here’s an image of backswings with the hands transported deeper (more inward) rather than upward: 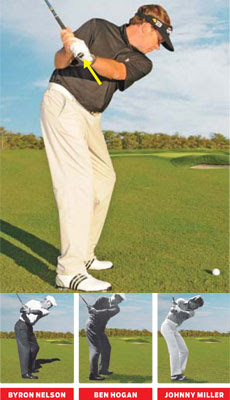 Generally speaking, most of the pros who have maximum angular momentum hit the ball the furthest. This is because coming down into impact their club head is still behind their hands for a much longer period. 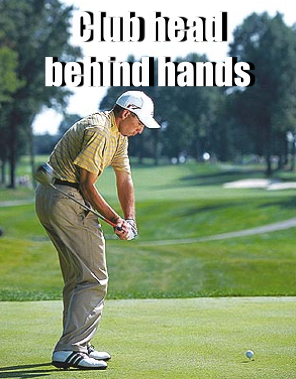 Practicing transporting your hands a little more around your body rather than upward in your backswing is something that you should be able to do on your own.

Try it and observe the results, I think you’ll like what you see.

Next issue we’ll discuss the last of the three true fundamentals: The ability to match the clubface to the swing path to control the curvature of the ball to keep it in play.

Love your practice, own your swing, own your health,

Lessons are available for all ages and skill levels, please contact
me – Tom Tucker – at (716) 474 3005 or email me at ttucker@rochester.rr.com
for more information.

Walking It Across The Road

Fixing A Pull Or A Pull-Hook

What Up? What it is? Cancel reply

This site uses Akismet to reduce spam. Learn how your comment data is processed.

If it's not your cup o' joe, you can unsubscribe later.

You have Successfully Subscribed!